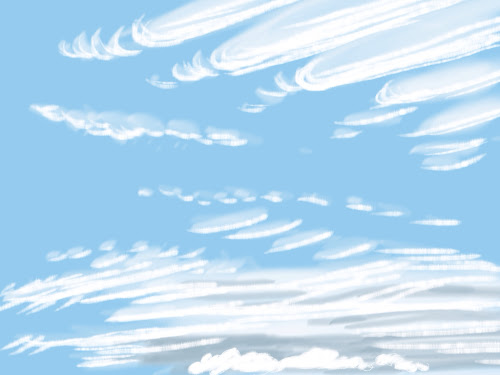 Altocumulus in full glory this morning, moving through my tears. RIP my sweet Aunt Diana, may she continue to feed and love me as I love her.
Diana Ellis September 26th 1939 - October 22nd 2012.

Posted with Blogsy
Posted by Deborah Durban at 9:05 AM No comments:

In the blog I meant to mention I did have physical help from Steve and Dennis Timmerman, both in taking the doors on and off (the biggest thunder storm happened in the midst of this project, so doors were off and on!) and in painting some parts with a second coat, thank you both, the doors look great.

Posted with Blogsy
Posted by Deborah Durban at 2:53 PM No comments:

When traveling through Australia in the late '80's I was intrigued and loved the Australian Aboriginal Paintings, especially the ones of dreamtime and song lines, their colour, energy and form were just beautiful and had qualities unknown to me as a British artist. I had the opportunity to fly in a small plane over Uluru (European name : Ayers Rock) and Kata Tjuta (European name : the Olgas) in the Northern Territories. At about 800 feet up I was watching the landscape below and realized that many of paintings were from this view ( or there abouts) and many had been done BEFORE humans could fly mechanically.

This increased my fascination with such work and have always wanted to explore a little of this way of working, but, nothing to the depth that the Aboriginals work of course but just to try and play with the idea. 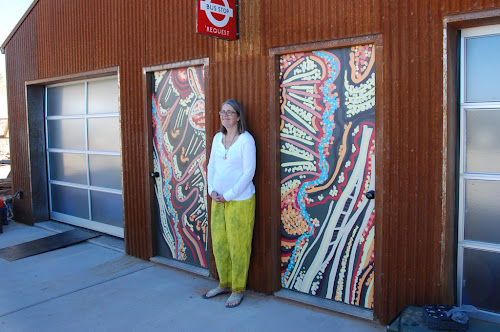 Well the opportunity arose recently, when my good friend, Joy Stein, artist and photographer, had the opportunity to sail over our back yard - Zion National Park, Utah - in a hot air balloon. She allowed me to peruse her many photos and I was thrilled to find the canyons and scape were not dissimilar to the Australian landscape from above, which was not that surprising as this area is really similar in geology and geography. I immediately wanted to transfer some of the images onto our new house and studios, and there were 3 perfect canvases available on the walk-in doors to my studio and the 2 workshops. 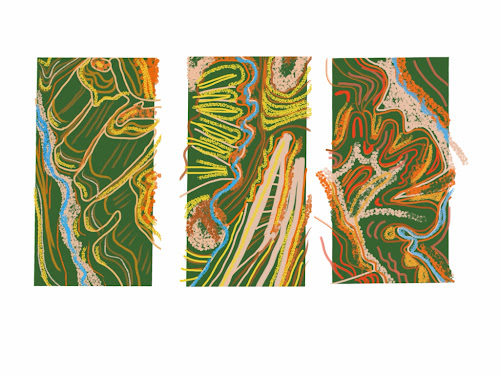 I selected 3 aerial shots and drew some ideas on my iPad (see above). Using paint samples from Lowes, I executed the work this last week on the doors themselves using the green background as a base, having a lot of fun in the process, great to get my hands into some colour. 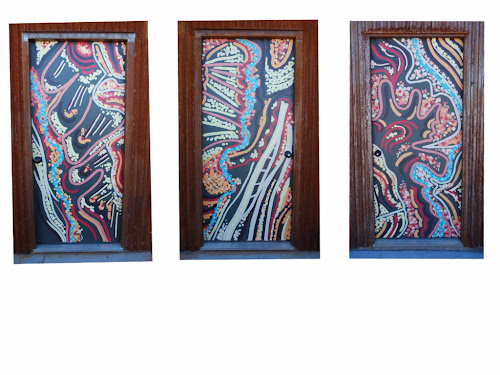 I have got to say that my admiration increased for these artists. I was working with photos and drawings, and they, I assume, do not or have not... They have 'travelled' with their work and you can see that their intuition really takes them on their journey. Dot making is harder than you think, finding the right implements was key, cut foam, corks, dowel and #2 pencil erasers were mine. I approached the painting pretty much in a European traditional way, sizing up from a grid the rough shapes. Painting the line parts and in-filling with the dots, starting large and working smaller. The Virgin river which runs through each panel, started as a small blue line just to indicate its journey, then the blue, turquoise, green and white were the last to be painted as they were the smallest set of dots and I really wanted the river to pop like the jewel it is. 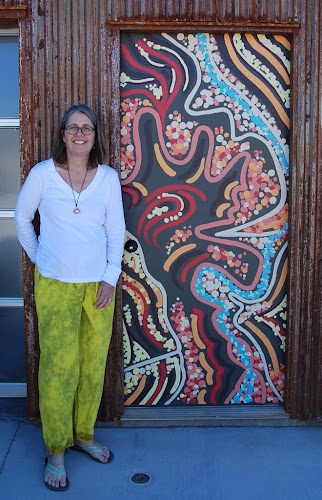 North facing (to the street) 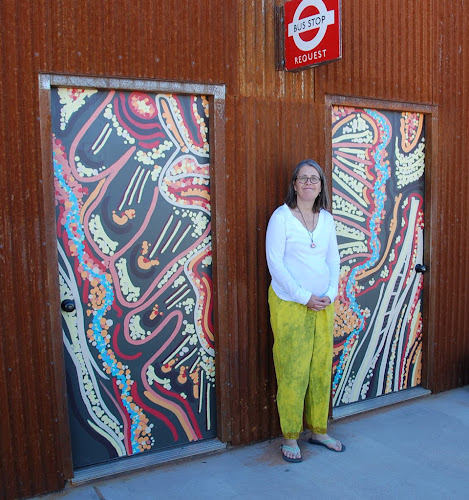 Come by and see the doors for yourself, beer or tea anyone? 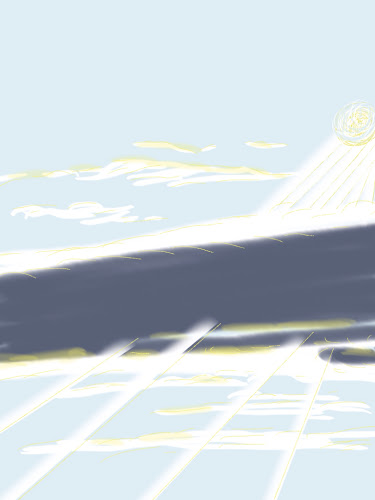 Posted with Blogsy
Posted by Deborah Durban at 7:56 AM No comments:

Last night we experienced our biggest storm yet, in the metal house, it started with quarter inch hail and plenty of very loud thunder and rain on and off all night. It was crazy night.

Here is the sky this morning... 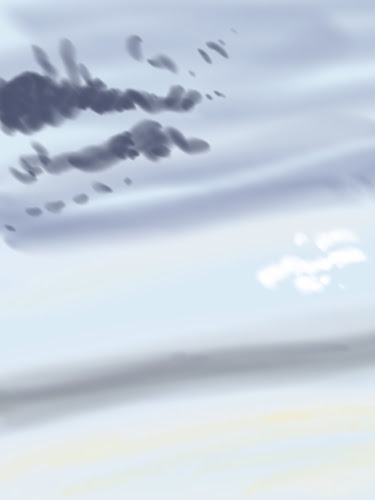 And are the skies from yesterday... A calmer morning! 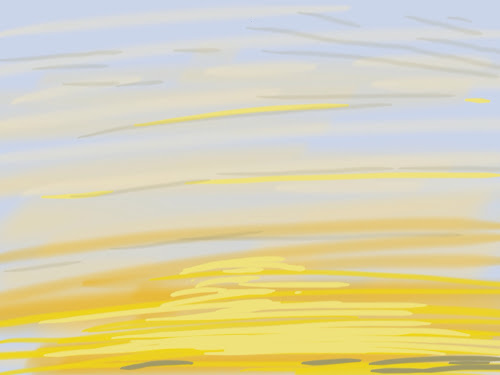 But you can see the storm start to build, it actually rained from about 4 pm. 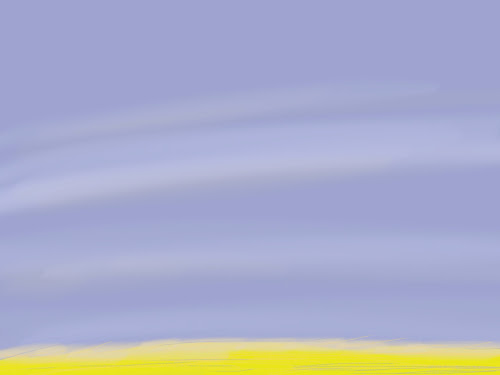 Posted by Deborah Durban at 7:06 AM No comments: 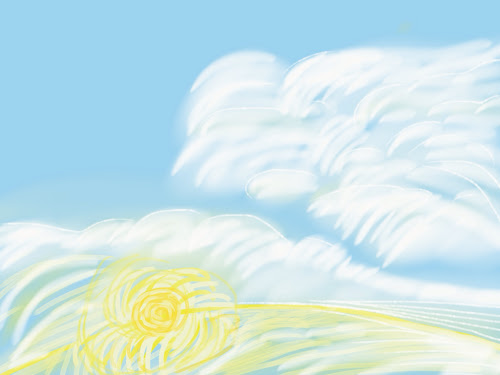 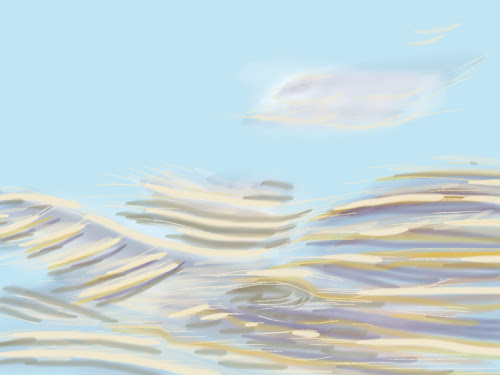 I need to re-visit Van Gogh, to capture that morning rise in a painterly fashion - not there yet!

That's why they call it a practice! And I need more... Always.

Posted with Blogsy
Posted by Deborah Durban at 7:02 AM No comments:

Deborah Durban
Virgin, Utah, United States
British born mixed media artist living and working in Zion Canyon corridor. Exploring a new media, the iPad, this is a visual blog reflecting upon mind, body and spirit, through the ever changing skies and other drawings.